We found our Pomeranian behind a bush while house sitting for some friends years ago. She was eight months old and weighed five pounds. We located her owner, who told us the dog had been gone for two nights. A friend had given the dog to her as a gift and she never really wanted the responsibility. Long story short, she gave her to us. We named her Holly and she brought us such joy.  We were consumed with sadness when we lost her at age 16.  Six months later our depression still dominated our everyday lives. That’s when I said “That’s it, we have to get another dog.” My husband, Michael, agreed but it was late November and he thought we should wait until after the holidays. I wanted to respect his feelings, HOWEVER, I decided to look on the SFSPCA website and saw a very sweet looking dog, female and 6 years old. Perfect.

In a few days we needed to go downtown. Before driving home, I said “You know, we’re not too far from the SFSPCA.  We could make a quick stop just look at that little dog.”   Michael said, “But remember, we plan to wait until the holidays are over.”  “Sure, of course.” I said. We saw her leaning on the back wall of the glass-viewing room. Although she had two roommates who were playing, she not only kept her distance but stayed about as far away as possible from them, her head down. We asked for a visit and were put in the “ring” to wait for her. We sat on the floor and she came over, although being a bit shy and cautious. After about 15 minutes Michael looked at her then to me and said “I think we should take her.”  We both knew she was our dog.

When at the adoption desk we were told she was very shy. The woman looked at the remarks that the volunteers write after walking a dog.  She read several and each one mentioned her shyness and that she didn’t interact much. We were given information about shy dogs to take home.  I sat in the backseat with her on our way home. We drove into the garage then open the door our back yard.  She actually stood at the doorway for a little bit taking it all in, as if she was thinking “Is this for me?”  She went up to the deck, then down to the patio and across the lawn, then back to us and we went inside.

We were advised to shut the doors to each room in the house and open them one at a time for her.  We forgot to do that.  But she calmly walked into each room, then came down to the living room where we stood waiting.  She walked over to the couch, jumped on, looked at us and said…” I’ll take it.” We never saw her shyness again.  She has her favorite toys, loves to run on the beach, gets lots of good walks to many different places, and loves to sit as close to us as she can when we are on the couch.

Several months after adopting Poppy we went to San Francisco Animal Care & Control to inquire about her background. Animal Care Officers had responded to the initial rescue call and brought her to the shelter.  We were told she was left on a MUNI bus in S.F.  At the end of the line all drivers must do a walk-through, and the driver found her alone with no collar and called SFACC. They discovered she had a chip and tried several times to reach the registered owner but there was no response. Then SPCA took her to their adoption center.

She didn’t look abused and is very well trained (sit, etc.).  We feel she was with someone who loved her and who’s life must have taken a big turn.  I hope, somehow, he or she knows that Poppy is happy. She is and so are we.

Many thanks to the AC&C and the SPCA.  We are blessed to have them.

Editor’s Note: The SFSPCA and SFACC are adoption partners and in an agreement made in 1994, the SFSPCA guarantees that it will take any adoptable dog or cat rescued in SF and hold it until it can adopt the animal into a suitable home. Read the agreement on SFACC’s website: https://www.sfanimalcare.org/about-us/agreement-sfspca-acc/

On a cold day in January, ACC dispatch received a call from a concerned citizen who noticed a bleeding puppy tethered to a scooter in the SF SOMA neighborhood. When officers arrived they found the man who had reported the puppy crying because he was so upset about the situation. The puppy was between parked cars partway down a filthy alleyway, tethered to a scooter and sitting in a pool of her own blood. She was lethargic but as the officers approached she stood up and started wagging her entire body. She curled into an officer’s arms as she was picked up and placed into an ACC van.
The puppy was taken to the emergency vet where she was given a poor prognosis. Parvo Virus was strongly suspected though she tested negative upon intake. She was weak, with little interest in food, and had ongoing vomiting and diarrhea. She received intensive care and was retested. A second test also came back negative though her condition was worsening; then suddenly, she bounced back!
Poppy made an amazing recovery and was made available for adoption. She was trained by volunteers in basic manners , socialized to people and dogs, and received lots of love from staff and volunteers.
Dogs like Poppy can require care beyond that which the City budget is able to provide. Thanks to Friends of Animal Care & Control’s Emergency Medical Fund, ACC was able to get Poppy the treatment she needed and she was adopted into a loving home. 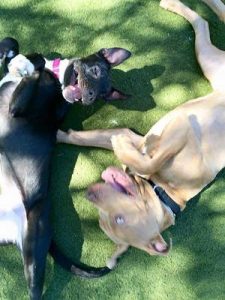 Poppy (left) playing with her buddy Bo at SFACC

Bruno came to ACC with an injured leg—he’d been hit by a car twice—and through funding by Friends of SFACC, received surgery to repair it. However, the post-operative rehab he needed could not be provided by ACC resources. So Pet Camp, a San Francisco pet daycare and staycare facility,  rehabilitated (physically and socially) Bruno over a period of seven weeks staff embraced the challenge of giving him physical therapy (three times a day and a swim in a special therapy pool every other day) and lots of love. Shy, gentle Bruno came out of his shell and became a social butterfly who enjoys playtimes with other dogs, is compatible with cats, and has been given a 100% clean bill of health by the vet.
Bruno became a Pet Camp favorite camper over his seven-week stay. The Pet Camp staff not only loved and rehabilitated Bruno, they blogged about him on the Pet Camp website, showing his weekly progress and sharing his story through social media—creating adoption interest through this effort. He will be missed by his entourage at Pet Camp but they’re happy to have helped him on his way to his forever home.
The partnership between ACC and Pet Camp was made possible by a service-trade sponsorship through Friends of SFACC. Friends of SFACC offers sponsorship benefits each year at Pet Pride Day, usually in exchange for monetary payment but in this case, Pet Camp gave ACC their services, a very practical way to donate. Thank you Pet Camp for going above and beyond to help Bruno become the happy, healthy dog he is today.
Bruno was adopted by Christophter Cendak, who gave ACC an update the day after bringing him home:  “One day in the books and Bruno has settled in nicely. His sister, Stitch, is excited to have him around. We are so happy to have him in our pack. Everyone at the ACC was so nice and helpful. Thanks!!!”

Chile the conure was clearly happy to be reunited with his person, who came to ACC to look for him after he was lost for one day. The microchip clinic sponsored by Friends of SFACC enables S.F. residents to microchip their dog or cat, and has reunited many pets with their people over the years. A microchip or collar ID is the best way to identify pets if they are ever lost. Some pets (like Chile) cannot be microchipped so please remember to check SF Animal Care & Control when you find an animal or lose a pet—it’s a great day when animals get to go home again!

Gem is a poodle puppy who was found on the conveyor belt at the S.F. Recology sorting center. It’s truly a miracle that she survived, thanks to the quick reactions of Recology employees who rescued her from a sorting conveyor belt at the SF dump with seconds to spare. Gem was rushed to ACC and treated for her injuries. She then spent time recovering in a foster home before she was made available for adoption.
Gregory Foster and Arturo Pena, who saved Gem’s life, were later recognized by the S.F. Animal Control and Welfare Commission in a special ceremony in January, 2014 at City Hall. ACC staff and Gem were on hand to show their gratitude for the workers’ quick actions and compassionate care. ACC received over 200 applications from people across the country hoping to adopt Gem. A lottery was held and she was adopted by a lucky Recology employee, a happy ending for this cute little pup. We hope some of the folks who wanted to adopt Gem will come and adopt one of our other gems!

Read newsletter archives from 2012 to present.

Sign up below to receive our e-newsletter.
2200 subscribers and counting!